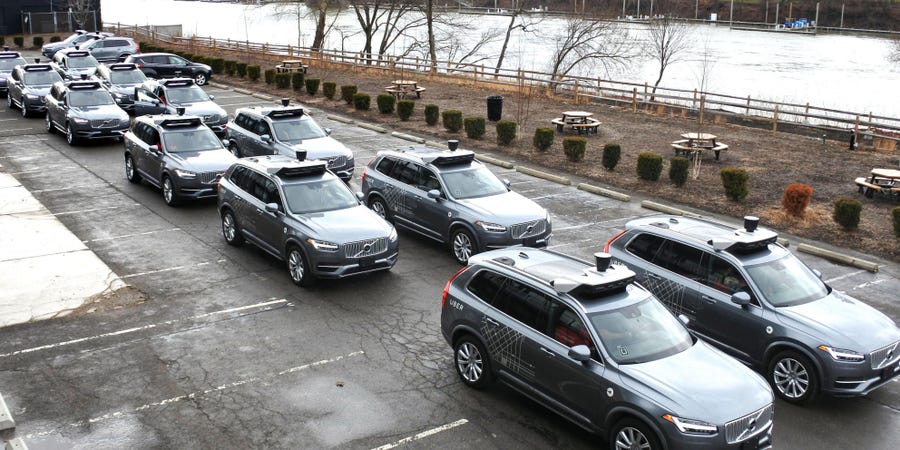 Last year, Tesla Inc. CEO Elon Musk had all intentions of starting to operate a fleet of self-driving robotaxis sometime this year. Now he says he’s hoping “to deploy the system with humans monitoring it in early 2021, depending on regulatory approval.”(WUSA9.com)

In the last several years, other companies have pledged to start a fully-robotic ride share service without human backup drivers as well. However, things were delayed when an Uber self-driving test vehicle hit and killed a pedestrian in March of 2018. The car was unable to predict Elaine Herzberg walking her bike across the street in front of the vehicle.(BusinessInsider.com)

Believe it or not, the idea of self-driving cars first came about in 1939! General Motors (GM) introduced an autonomous car into the New York World’s Fair Futurama section (as part of its vision of the future of America in 20 years-time) that year.(Kambria.io)

“Self-driving vehicles are cars or trucks in which human drivers are never required to take control to safely operate the vehicle. Also known as autonomous or “driverless” cars, they combine sensors and software to control, navigate, and drive the vehicle.” (UCSUSA.org)

“Self-driving car technology has long been lauded for its ability to prevent crashes related to human error.” More studies in the past several years have shown that autonomous vehicles may not be able to prevent all accidents caused by human error. In fact, a new study by the Insurance Institute for Highway Safety (IIHS) says that self-driving cars will only stop about one-third of accidents caused by human error. Human error is the cause of about 94% of all U.S. car crashes. “To avoid the other two-thirds, they would need to be specifically programmed to prioritize safety over speed and convenience.” (IIHS.com)

Alexandra Mueller, lead author of the IIHS study says it’s difficult enough to build self-driving cars that drive as well as people drive; but they’d actually have to drive better than humans “to deliver on the promises we’ve all heard.”

The study shows that self-driving cars excel in these instances:

“For self-driving vehicles to live up to their promise of eliminating most crashes, they will have to be designed to focus on safety rather than rider preference when those two are at odds.”

The study imagines a future where all cars on the road are automated. Researchers found that accidents due to sensing and perceiving errors, as well as driver incapacitation would more than likely no longer happen, “because cameras and sensors of fully autonomous vehicles could be expected to monitor the roadway and identify potential hazards better than a human driver and would be incapable of distraction or incapacitation.” However, sensors would have to work perfectly and functions could never malfunction.

For the other two-thirds of accidents, autonomous cars would have to be specifically programmed to avoid these common errors:

Those developing autonomous vehicles say it could be 10 years or more before they will be carrying passengers in every city. There are a number of obstacles that they have to conquer first.

If you have suffered a collision in South Carolina, the legal team at the Law Offices of David L. Hood will help you navigate the situation professionally. We have years of experience in helping people involved in serious accidents figure out the legal requirements and details needed to move forward after an accident. After gathering all the necessary information we will pour our efforts into building your case to get a fair settlement or take it to court if the need arises.

Our entire team has years of experience representing various clients and car accident victims in South Carolina. Having a passion to help, we offer a free initial consultation where we provide candid legal advice on what options you may have. If you choose to work with us, we promise a contingent-fee based case, where you don’t pay unless we get a recovery in your case.

You can find our contact information on the page here and schedule your free consultation session.