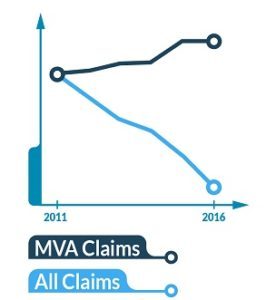 New technology has cars steering themselves, braking automatically, warning drivers of other cars nearby, and helping the driver maintain safe following distances. Despite safety improvements, and this cutting-edge technology, motor vehicle accidents (MVA’s) in the United States are on the rise.

Although Workers’ Compensation (WC) claims have declined overall (due to workplace automation, robotics and continued advances in safety), claims for MVA’s have increased in recent years.

A study released in August, 2018 by The National Council on Compensation Insurance (NCCI) shows that between 2011 and 2016, WC claims decreased by 17.6%, but frequency for on-the-clock auto accidents increased 5%. (Louise Esola) Also, while frequency of lost-time claims has been on a steady decline, those same claims arising from auto accidents are rising.

The NCCI study also found that “over 40% of workers compensation fatalities involved a motor vehicle accident.”

“So, what might explain this dangerous trend? A striking similarity in the growth and popularity of cell phone, and particularly smartphone, use over the same time period suggests that distracted driving may be a factor.” (NCCI)

There are many external factors that may contribute to MVA’s. The increasing popularity and use of smartphones corresponding with the increasing trend of MVA’s is noteworthy. Between 2010 and 2016, the percentage of cell phones that were actual smartphones tripled, from 27% to 81%.

Other findings from the NCCI study:

What efforts are being put in place to address the rising number of MVA’s in the United States, and to discourage distracted driving?

What are the laws dealing with driving and cell phone usage in South Carolina?

A 2014 South Carolina law states that it is illegal to type or send a text when driving. Drivers can still have the phone in their hands, having a conversation, or using the GPS. As a result, offenders basically have to admit to texting, in order for an officer to write them a ticket. (Post and Courier)

In 2017, according to the SC Department of Public Safety, cellphones or texting specifically were the cause of 331 collisions, leading to five deaths and 167 injuries. (The State)

A bill “to make it illegal to drive “under the influence” of an electronic device” has been sponsored by State Rep. Bill Taylor, R-Aiken. He plans to reintroduce the bill in January. This law would, for the first time, give police authority to ticket drivers for even having a phone in their hands while driving.

For information on steps to take if you’ve been hurt on the job in South Carolina, please click here.

The Law Offices of David L. Hood have been fighting for the rights of injured workers in North Myrtle Beach, Myrtle Beach, Murrells Inlet, Georgetown, Charleston and all across South Carolina for over 25 years. We have a dedicated team that will strive to take care of your claim professionally and treat you with respect. Over the years we’ve represented hundreds of injured workers and their families, working hard to get them the medical treatment and compensation they deserve.