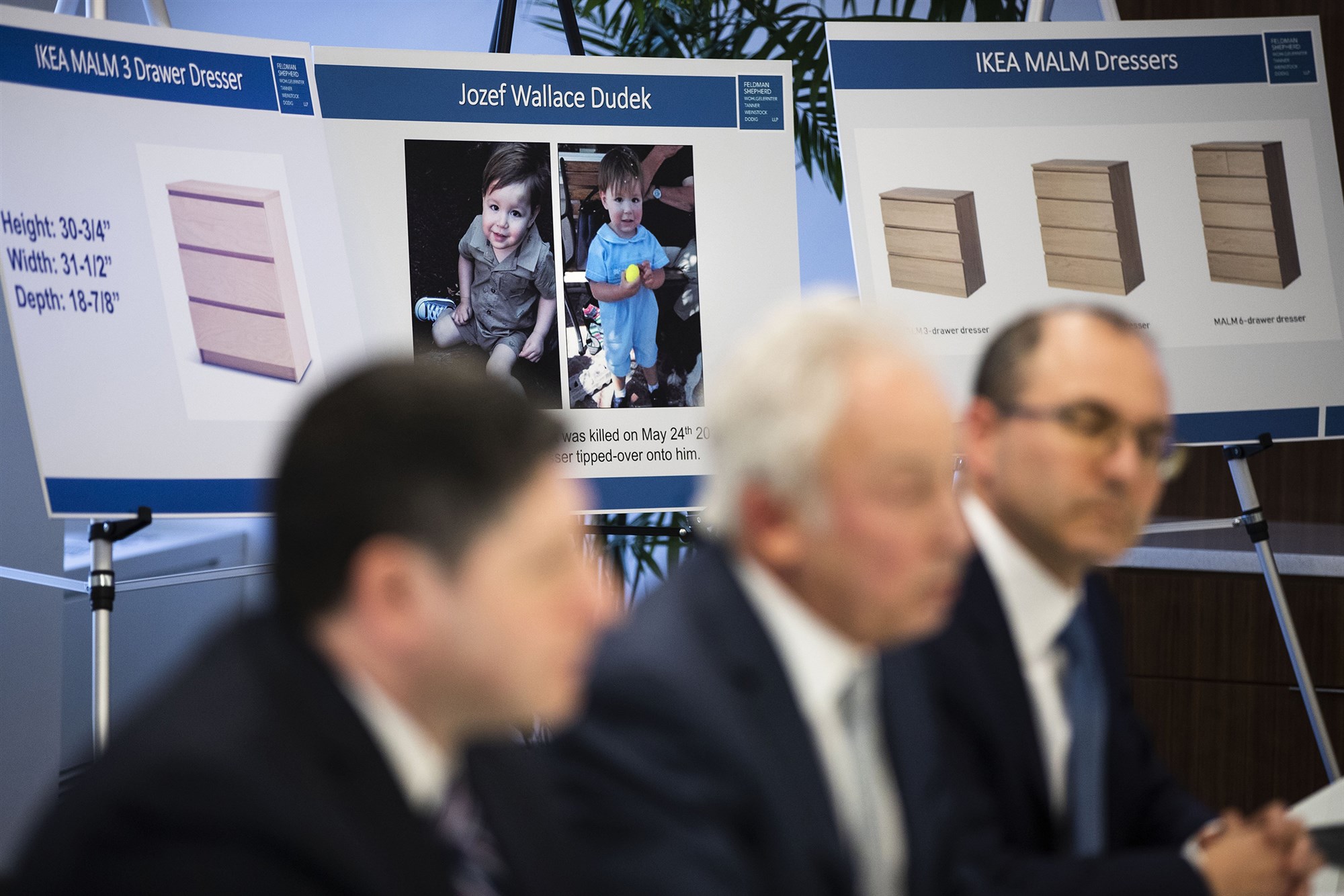 The family of toddler Jozef Dudek sued Ikea after a recalled 70-pound “Malm” dresser tipped over on him, causing his death in 2017. Ikea agreed to pay Jozef’s parents $46 million.

“The furniture maker issued a recall for millions of Malm products in 2016 after the deaths of three children…” A combined settlement of $50 million was reached with the families of those children in December of 2016.(NBCNews.com)

Furniture tip-overs can happen when children climb on furniture to access things out of their reach.

Nancy Cowles, executive director of Kids In Danger said, “The first known death from Ikea tipping furniture was in July 1989 – 30 years ago. Those deaths continue.”(CBSNews.com)

At a recent news conference, “parents-turned-activists called out…Ikea…and U.S. Regulators for acting too little and too late in addressing an issue linked to the deaths of at least 10 children.”

Janet McGee of Parents Against Tip-Overs (PAT) said her son Ted was the eighth child reported to have been killed by an Ikea dresser. At that time, the company finally issued a recall for the unstable dressers, telling customers that the dressers need to be anchored to a wall to keep them from tipping over.

“After two children’s deaths in 2014, Ikea warned owners of the dressers to anchor them to a wall, and offered free repair kits. At that time, there was no recall. Only after reports of more injuries and deaths did Ikea finally recall all Malm dressers and chests, along with some additional dressers, in June of 2016.

Cowles said that in the past three years, since the recall, “Ikea has done little to promote the recall or encourage consumers to remove the deadly dressers from homes. Instead, they continue their education campaign, reminding consumers to secure the unstable dressers to the wall.”

Ikea says owners of the recalled dressers should stop using them and contact Ikea (https://www.ikea.com/us/en/customer-service/product-support/recalls/following-an-additional-child-fatality-ikea-recalls-29-million-malm-and-other-models-of-chests-pub4128a7af). Customers will be given the option of a refund or a free kit to anchor the furniture to a wall. Ikea is offering free in-home anchoring service by request. Ikea will pick-up the recalled dresser for free, for those who want a refund.

Other online resources used to write this article: