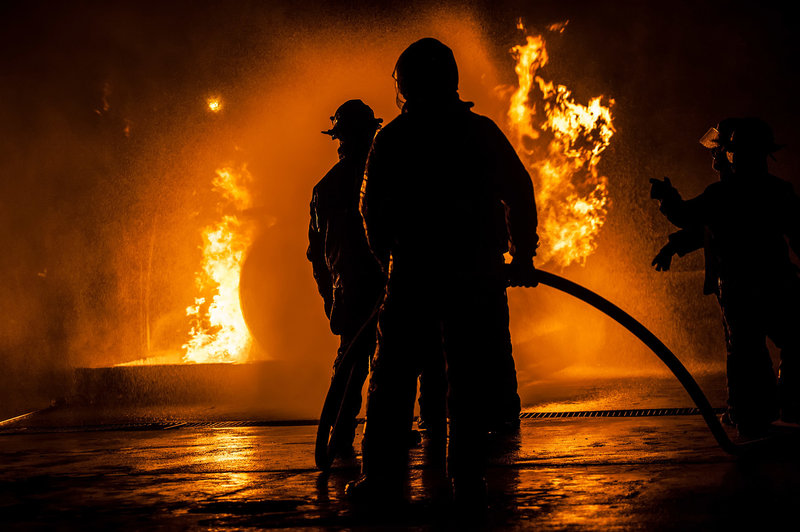 74-year-old Steve Dillman, who spent 38 years as a firefighter, was diagnosed with throat cancer in 2008. Doctors told him it was caused by smoking. Dillman says, “I thought it had to be job-related, because I’ve never smoked a day in my life. I don’t chew. I don’t drink excessively … and that’s the three main criteria.”(NPR)

Dillman remembered one warehouse fire his fire station responded to. He and the other firefighters noticed after putting the fire out that their skin had peeled (like sunburn) in any place they had sweated – under their arms, around their groins. They later learned that the warehouse had been “filled with boxes treated with a flame-retardant chemical that sent toxic gases in the air – including formaldehyde, a known carcinogen.”

The National Institute for Occupational Safety and Health (NIOSH) published a report in 2013 saying that firefighters are at higher risk for cancer than the general population. They have a 9% higher risk for a cancer diagnosis, and a 14% higher risk of dying from cancer. (First Responder Center for Excellence) The report found that firefighters are more likely to be exposed to cancer-causing contaminants, like asbestos in old buildings, and diesel exhaust from fire trucks.

Studies show that firefighters have an increased risk for the following types of cancers:

“The correlation between firefighters’ on-the-job exposure to carcinogens and their subsequent illnesses is concerning enough to policy makers that a growing number of states have passed laws – 42 states and Washington, DC – designed to help firefighters who develop cancer, according to the non-profit Firefighter Cancer Support Network.”

These laws presume that a firefighter diagnosed with cancer while working, or within a certain amount of time after retirement became ill because of their job. These “presumptive laws” make it easier for firefighters to get workers’ compensation, disability benefits or death benefits for their families.

Unfortunately, it seems that these laws are not being adhered to. Firefighters are still being denied workers’ compensation after a cancer diagnosis.

Presumptive laws differ from state to state. Some only cover certain kinds of cancers. Some limit how long after retirement a cancer diagnosis is covered. Jeffery Burgess, an environmental health researcher says, “…cancer can develop anywhere from less than five years to over 30 years” after exposure. Some states only provide coverage up to five years, and one state only covers cancer for up to three months after retirement.

Some states want information on the specific fire that caused the cancer. Firefighters don’t usually keep records of this.

Dillman says firefighters need to focus on preventing exposure, by wearing protective masks (which was not standard practice when he was fighting fires), and practicing other preventative cancer measures.

At this time, South Carolina has not passed presumptive laws for firefighters diagnosed with cancer. The South Carolina Firefighter Support Network is pushing for legislation to be passed so that firefighters who are diagnosed can be compensated. A bill is currently in the house judiciary committee. (WBTW.com)

The Law Offices of David L. Hood have been fighting for the rights of injured workers in North Myrtle Beach, Myrtle Beach, Murrells Inlet, Georgetown, Charleston and all across South Carolina for over 25 years. We have a dedicated team that will strive to take care of your claim professionally and treat you with respect. Over the years we’ve represented hundreds of injured workers and their families, working hard to get them the medical treatment and compensation they deserve.